Cooper Smyl had the shootout winner while Brock Santa Maria had a pair of goals for the Soo Thunderbirds on Friday night
Feb 26, 2021 10:24 PM By: Brad Coccimiglio 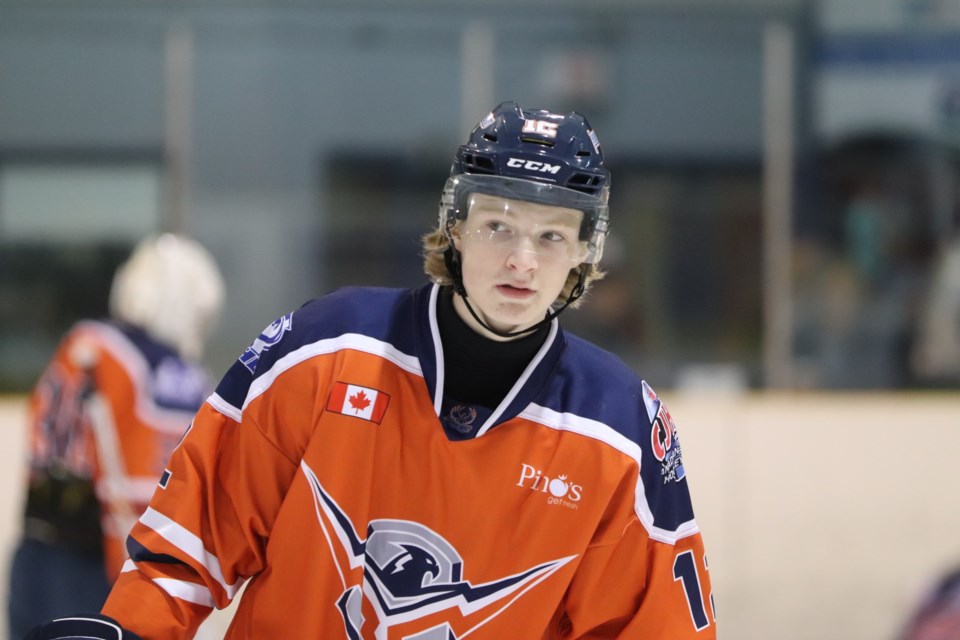 Following a league-wide shutdown due to COVID-19, the Soo Thunderbirds returned to action this week and have a pair of Northern Ontario Junior Hockey League wins to show for it.

On the heels of a 5-2 win over the Blind River Beavers on Wednesday night, the Thunderbirds picked up a 6-5 shootout win over the Beavers on Friday night at the John Rhodes Community Centre.

The two clubs traded goals in the opening period as Brock Santa Maria scored his third goal of the season just under six minutes into the contest to open the scoring for the Thunderbirds before Jacob Kelly tied the game just 2:04 later for Blind River.

Santa Maria’s goal came as he cut in on Beavers goaltender Gavin Disano after taking a nice pass from Noah Boman.

Kelly beat Thunderbirds netminder Scott Young on a breakaway moments after taking a great pass from Nick Jameus to go in alone on the Sault goaltender.

The Thunderbirds went ahead 2-1 just over five minutes into the second period when Caleb Wood beat Disano stick side on a shot from the slot.

Just 1:35 later, the Beavers tied the game as Dre Leismeister scored his first of the season, banging in a loose puck past Young at 6:47 of the period.

Blind River would pull ahead thanks to a pair of goals 1:34 apart later in the period.

Devin Mauro made it 3-2 Beavers when he drove the net and redirected a feed from Kelly shorthanded at 11:46.

Matt Cato then increased the Blind River lead on a tap-in at the end of a give-and-go with Lucas Adams.

The Thunderbirds would pull to within one with 1:28 to go in the period as a point shot by Cam Dutkiewicz found its way past Disano on the power play.

In the third period, Cooper Smyl tied the game at four when he beat Disano with a shot from the right faceoff circle 5:34 into the final period.

Santa Maria proceeded to give the Thunderbirds a 5-4 lead when he beat a Blind River defenceman in the slot before beating Disano glove side at 12:05.

Blind River forced the shootout late in the contest as Cato picked up his second of the night, deflecting a point shot by Kelly on the power play with 2:52 to go in regulation.

Smyl proceeded to score the lone goal of the shootout to give the Thunderbirds the victory.

Young finished the night with 30 saves for the Thunderbirds and stopped all three Blind River shooters in the shootout.

Disano was busy at the other end as well, stopping 37 shots in regulation time for Blind River.

The two teams will return to action on Sunday afternoon in a 2 p.m. start at the Blind River Community Centre.

Friday’s lone other scheduled game in the NOJHL between the Espanola Express and French River Rapids was postponed after a member of one of the teams had been in contact with a person who had a positive initial COVID-19 test.

In a release, the league said the risk was deemed “very low” but proceeded with the postponement of the game, as well as Saturday’s scheduled matchup between the two clubs out of an abundance of caution.

“We want to make sure we continue to do the safest and follow the most prudent action in this situation and postponing these two games is the best and safest course of action,” NOJHL commissioner Robert Mazzuca said in a prepared statement.

“At the current time, no member of either club has had a positive result in testing or showing any symptoms, however we will continue to encompass an overabundance of caution on this,” Mazzuca added.

Both teams have entered the provincial and regional Public Health Unit-regulated quarantine period.

The league also noted in a release the plan to announce additional cohort schedules in the next few days.