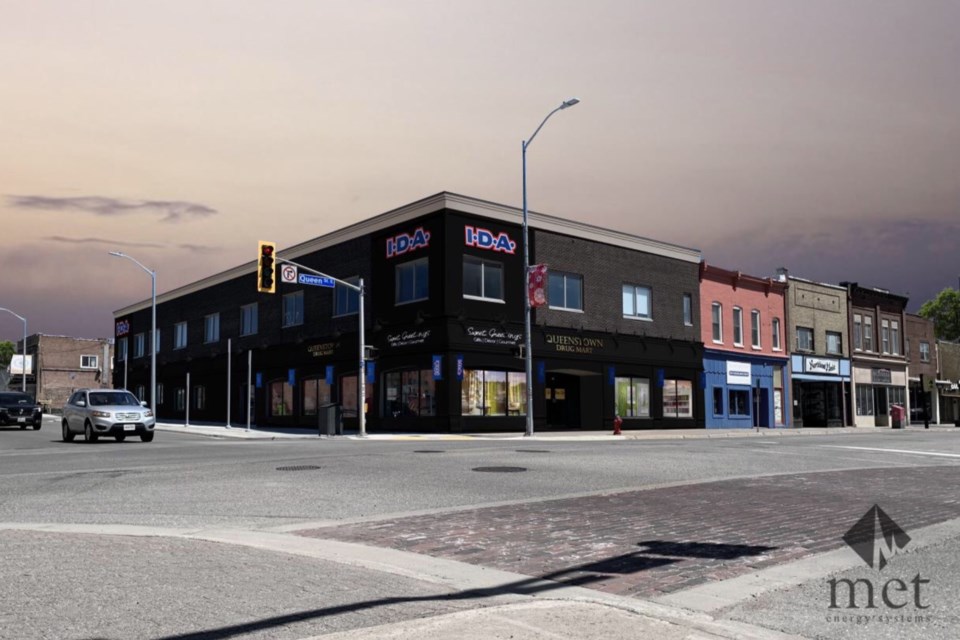 The Davis Block at Queen and Bruce streets, most recently home to The Summit and New Life churches, will soon be an IDA Pharmacy.

The high-profile location at 302 Queen Street East, kitty-corner to GFL Memorial Gardens and directly across Bruce Street from the headquarters of SooToday/Village Media, will be re-named Queenstown Drug Mart, according to a grant application to be presented to City Council on Monday.

"In addition to the pharmacy, the newly activated space will also have a walk-in clinic, Sweet Greetings Gift Shop (complete with a coffee bar), a cosmetics section and groceries," says the application from Pharlaw Investments Inc.

"It is anticipated that the revitalization of this building will result in five full-time positions and 15 part-time positions. The work will also include significant upgrades to the facade of the building which are in keeping with the overall heritage of the downtown."

Building plans submitted to the city show the adjoining building previously occupied by Charlie and Wendy Thomlinson's Glassworks will also be part of the new operation.

Pharlaw is applying for $40,000 in grants for facade improvement and building activation.

Opening date for the new location, or the fate of the existing Station Mall IDA Drug Mart hardly a block away, have so far not been announced.

Other appplications to be considered by City Council on Monday include a $20,000 facade improvement grant to Joe and Romina Ruscio for 405 Queen St. E. and a $5,000 patio conversion grant to East Side Pizza at 76 East Street.

Monday's City Council meeting will be held by teleconference to comply with COVID-19 pandemic requirements.

The meeting will be livestreamed on SooToday starting at 4:30 p.m.

About the Author: David Helwig

David Helwig's journalism career spans six decades beginning in the 1960s. His work has been recognized with national and international awards.
Read more