Fall follows through on bid to run 100 marathons for charity 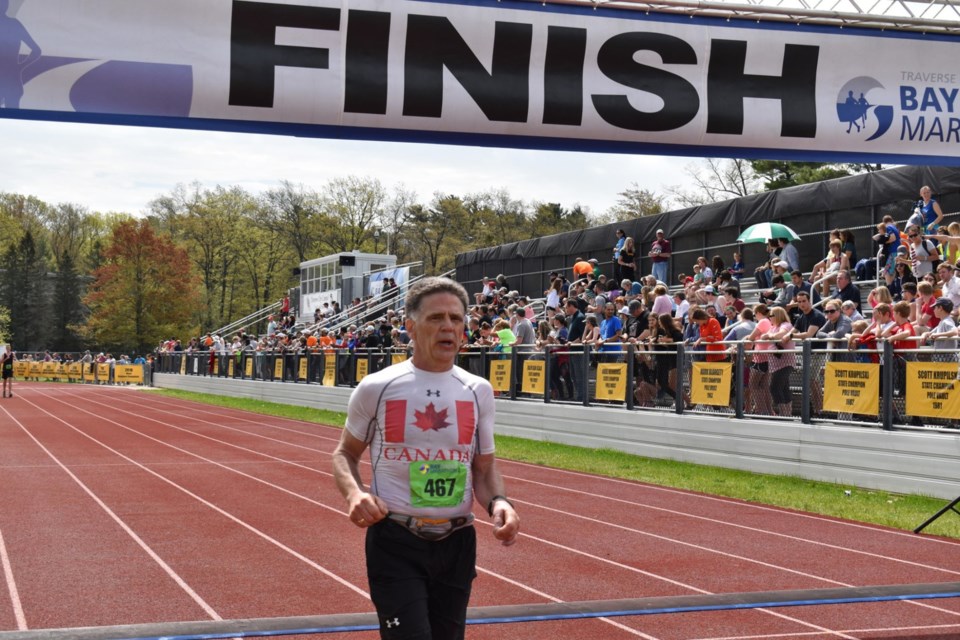 “It’s so inspirational to go by there. Any time we drive by we stop and have a moment of silence,” said Fall, who is about to embark on his own “Marathon of Hope.”

The former commercial pilot spent the last 17 years as an occasional teacher at the Huron-Superior Catholic District School Board. He’s running from Victoria B.C. to Sault Ste. Marie.

The 4,200-km journey brings Fall from his former home province to his current Sault home.

The journey was supposed to kick off last year, but COVID put those plans on hold.

Fall left for B.C. on Saturday. He’s set to begin his run April 12.

Last year’s cancellation was tough to take, but Fall said it was just as well, considering all the uncertainties surrounding the pandemic.

Other than being a year older (he’s 61 years old) and a few more aches and pains, the avid runner is ready for the challenge.

He’s inspired by the volunteer work he and his wife Colette did for the local Terry Fox Run.

Losing his mother to cancer in 2013 and seeing the positive impact Make a Wish Canada had on his niece in British Columbia added motivation.

Fall doesn’t look at the annual caravan of Trans-Canada runners, cyclists and walkers as competition for attention. He looks forward to meeting these kindred spirits on the road.

He’s met a number of them in the past and they’ve also provided inspiration. They caused him to wonder ‘Why not me?’

“Terry Fox did a marathon a day for 143 days on one leg. I have two legs. I’m older, but I think it’s attainable,” said Fall, a veteran of 14 marathons.

The plan is to run about a marathon a day (42 km) with one day off a week.

He hopes to reach Sault Ste. Marie some time around the beginning or middle of August. His wife will be driving an RV ahead of him as he runs. The goal is to raise $300,000 which will be split between the two charities. The Falls will live out of the RV during the run.

Attaining the goal will be a challenge because COVID put the brakes on social fund-raising gatherings.

Fall says he’ll rely on social and traditional media to get the word out. He will be blogging during his run and wearing a GPS so people can track his progress.

The run requires mental and physical discipline, but Fall says the key is getting into a routine.

He said the last leg of the run after Thunder Bay may be the most difficult because of all the hills.

If it gets tough Fall said he’ll “stop and think about who he’s doing if for.”

Make a Wish Foundation and Childhood Cancer are causes that complement each other, he said.

Childhood Cancer Canada is dedicated to funding national research while delivering support and programming for families affected by childhood cancer. More than 10,000 children in Canada are in treatment for cancer and one in five will not survive beyond five years.

Make A Wish Canada provides children with critical illnesses the opportunity to realize their most heartfelt wish. Some children eventually get better, but regardless, Fall said the experience can “give them a whole new perspective.”

Online donations can be made at www.fallorick.com